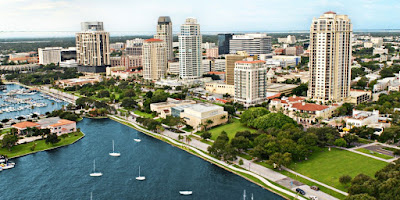 New York style brownstones are planned for a downtown St.Petersburg site on First Street North and Fourth Avenue (www.discoverdowntown.com). The five high-end spaces are part of a joint venture project between owner Frank Menna and hotel/restaurant owner Steve Gianfilippo.  The new project, called The Brownstones, will consist of a row of 4000 square foot homes complete with roof decks and space below for professional offices.  Each unit will have a garage and elevator.  Pre-construction prices are expected to range between $1.3 and $1.8 million. The location, just two blocks from Beach Drive,is ideal due to the proximity to shops and restaurants. A flurry of development in the area includes the 18 story Bliss Condo tower and Rowland Place, a 17 condo building. If you would like to get in on the downtown action, call Keyvan Kohan today at 727-565-1658 or check out www.Suncoasthome.com.
Posted by SunCoastHome at 4:56 PM No comments:

Prepare to see aging apartments being replaced by upscale condos along Gulf Boulevard in the near future.  The plans have been approved by the city planning board and new developments are on their way.  The first project, named Astoria Beach Club, will be a five unit, three floor condo located at 13700 Gulf Boulevard.  A second project will be a four story, eight unit complex named Azul.  This redevelopment will combine two lots from 14107 and 14133 Gulf Boulevard. If you are interested in either of these two projects or any other similar properties in Madeira Beach, give me a call.
Posted by SunCoastHome at 12:20 PM No comments:

Freshwater springs, including the ones at Ichetucknee State Park, are this area's treasures.  The state boasts upward of 600 springs.  Some are so small they are easily missed, while others are large enough to feed a river.  Many of the state's first communities back in the 1800's centered around springs.  Popular watering spots include Ocala near Silver Springs, Daytona near DeLeon Springs, and Jacksonville near Green Cove Springs.  Dozens are held in the public trust while some are privately owned. Millions of gallons of fresh, 72 degree water pumps from these gems daily.  If you haven't experienced the a cool dip, just ask a local for their favorite natural park and jump in one day soon.
Posted by SunCoastHome at 12:31 PM No comments:

St.Pete Pier Could Soon Be Gone

This Thursday the St.Petersburg City Council will vote on a $3.1 million demolition contract.  If approved, the inverted pyramid pier could be dismantled soon.  Already issued, is a city demolition permit for the pyramid, since the structure does not touch water.  However, the U.S. Army Corps of Engineers requires a permit to demolish the rest of the St.Petersburg Municipal Pier. Federal requirements include cultural mitigation.

The bridge and deck of the pier were part of a 1926 Million Dollar Pier, making them eligible for inclusion in the National Historic Registry.  City, State and Federal agencies together understand a draft memorandum calls for historic markers on the new St.Pete Pier, preservation of some artifacts, and documentation of the current pier.

According to St.Petersburg Preservation president Emily Elwyn, very detailed drawings can be done so that researchers in the future can go back and look at the pier to see how it was designed.  Also included will be documentation on the work of inverted pyramid architect William Harvard and other local architects.

The entire demolition is supposed to take 180 days with much of the concrete rubble used to shore up seawalls at nearby Albert Whitted Airport.
Posted by SunCoastHome at 1:11 PM No comments: